Google’s YouTube is starting a subscription service that allows users to stream ad-free music videos and to download them for offline use.

It is set to pose a challenge to Spotify, Rdio, Beats Music and other audio-only “unlimited” music services.

The launch had been delayed by a dispute with independent labels.

However, Google said it had now signed deals with hundreds of indies worldwide.

That has enabled it to include tracks from artists including Billy Bragg, who had previously said YouTube was trying to “strongarm” labels into agreeing to “low rates” by threatening to block their material altogether if they did not take part. 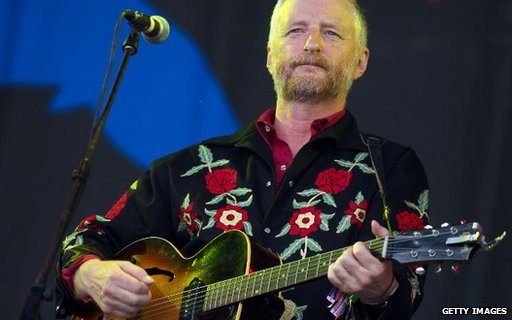 Billy Bragg had been critical of YouTube’s negotiating tactics

He told the BBC his music had been included as part of an agreement signed by Merlin – which represents indie labels – but that he had not been informed about the details.

The BBC understands that the terms of the deal state that the more plays a video has, the bigger the share of the subscription pool its publisher receives. 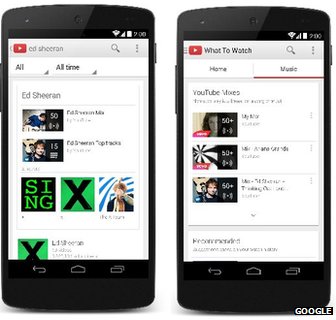 Brad Nevin, chief executive of The Orchard group of indie labels, said he thought the deal struck was both fair and “a phenomenal opportunity”.

Android devices will be first to be able to save clips, followed by Apple’s phones and tablets, but the facility will not extend to PCs yet.

The mobile devices will also be able to continue playing music in the background when they switch to other programs.

YouTube describes itself as “the biggest music service on the planet”, but Google Play is thought to lag far behind Spotify’s 12.5 million paying subscribers.

One expert said the new offer might tempt a number to jump ship.

“If you are someone who only listens to Spotify and doesn’t listen to YouTube, this won’t be a good enough reason to switch,” said James McQuivey, principal analyst at the Forrester Research consultancy.

“There is a certain comfort in the well-established digital habits that people already have. 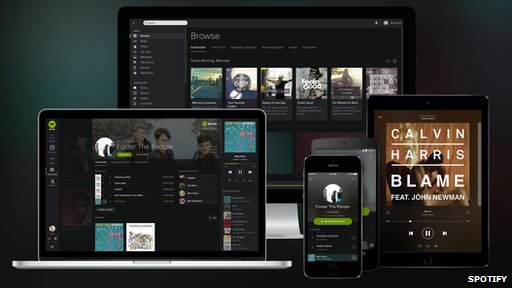 “But if you – as many people do – listen to both Spotify and use YouTube for music, then this is genuinely a reason to switch, because you not only have all the unlimited music but also the ability to move from audio to video, which is a very compelling experience.”

Those unwilling to pay can still access a new Music home page on YouTube’s apps and web service, which:

Should Spotify, the market leader in music streaming, feel able to relax?

Maybe not – there is now a new revenue stream available to artists, many of whom are disgruntled with what Spotify is paying them.

It’s not clear that YouTube Music Key will pay more – but if others follow Taylor Swift’s lead and desert Spotify, that could signal a shift in the balance of power in digital music.

Although Google says the new services will launch over the coming days, subscriptions will be available only to selected “beta” testers for the first six months.

Anyone can apply to join, but they need to be based in the US, UK, Spain, Portugal, Italy, Ireland or Finland.

Following the test, the general public will be invited to pay the $9.99/£9.99/9.99 euro monthly fee – the same price currently charged for Google Play All Access on its own. The beta testers will get a discounted rate. 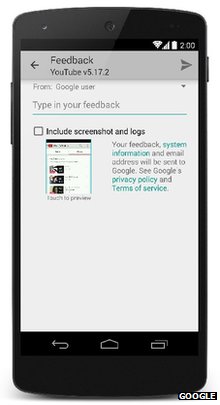 Video downloads are offered in 320p standard definition and 720p high definition formats, and must be stored on a mobile device’s built-in memory. Qualifying clips are flagged by a blue label.

Third-party tools have long given people a way to copy videos from YouTube to PCs, in breach of the site’s terms and conditions.

However, until now this has not been possible via apps distributed on Google’s Play marketplace and Apple’s App Store.

Mr McQuivey said that YouTube’s challenge was to convince its youthful audience that the convenience of downloading videos directly to a smartphone or tablet was worth the requested fee.

“YouTube is a form of cheating the music system, and has been for a long time, because people have been putting music up there without authorising it from the labels,” he said.

“YouTube goes through an elaborate process to identify it and put ads around it. But it’s not too far, in the user’s experience, from piracy.

“When Napster went legit, it thought it could take its brand equity among a young audience and transfer it into a subscription service, and that didn’t work out quite so well.

“The onus on YouTube is to make this the simplest transition that twenty-somethings can make.”

We’ll embark on a strike if … – Ayensu Factory workers