Surgeon with Ebola treated in US

A surgeon from Sierra Leone, who is critically ill with Ebola, has arrived in the US for treatment.

Martin Salia, who has US residency and is married to an American, has been taken to a hospital in Nebraska.

Meanwhile France has advised its citizens not to travel to parts of Mali, following the deaths of three people there from the disease.

More than 5,000 people have been killed in the current Ebola outbreak – almost all of them in West Africa.

Sierra Leone is one of the three worst affected countries, along with Liberia and Guinea.

Dr Salia, 44, had been working as a general surgeon at Kissy United Methodist Hospital in the Sierra Leone capital, Freetown.

It is not clear whether he was involved in the care of Ebola patients. 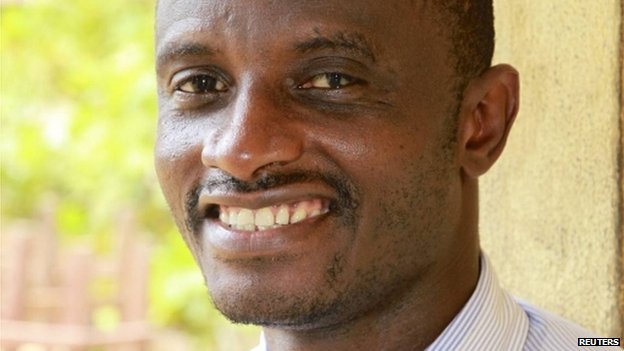 Dr Salia, seen here in 2013, had been working as a general surgeon in Freetown in Sierra Leone

The doctor, a Sierra Leone citizen who lives in the US state of Maryland, tested positive for the virus on Monday.

After being deemed stable enough to fly, he arrived in Omaha on Saturday afternoon and was transferred to an isolation unit at the Nebraska Medical Center.

“Information coming from the team caring for him in Sierra Leone indicates he is critically ill – possibly sicker than the first patients successfully treated in the United States,” the Nebraska hospital said in a statement.

Dr Salia is the 10th person treated for Ebola in the US. All but one – a Liberian man named Thomas Eric Duncan – have recovered.

The Democratic Republic of Congo declared itself Ebola-free on Saturday. A three-month outbreak, which was unrelated to the spread of the disease in West Africa, claimed at least 49 lives in the country.

However, the deaths of three people from Ebola in Mali have fuelled fears of a new hotspot.

France has advised its citizens not to travel to the Malian capital Bamako, or to the region of Kayes in the west of the country.

The World Health Organization (WHO) has declared the Ebola outbreak a global health emergency.

It was first identified in Guinea in March, before it spread to neighbouring Liberia and Sierra Leone. The WHO says there are now more than 13,240 confirmed, suspected and probable cases, almost all in these countries.

Cases have also emerged, though on a much smaller scale, in Nigeria, Senegal, Spain and the US, as well as in Mali.

Fabulous Wedding winners to tie the knot on Nov. 22