Russia under pressure at G20 summit

Russia has been rebuked by Western leaders about its role in the Ukraine crisis, at a G20 summit in Australia.

Canadian Prime Minister Stephen Harper told Russian President Vladimir Putin that he needed to “get out of Ukraine”.

US President Barack Obama said Moscow’s “aggression” in Ukraine was a “threat to the world”, while the UK threatened more sanctions unless Russia stopped “destabilising” its neighbour.

The two-day summit in Brisbane is focusing on promoting economic growth.

World leaders are expected to elaborate on plans agreed by G20 finance ministers in February to boost global growth by 2% in five years.

However, Saturday – the first of the two-day summit – was dominated by Ukraine, where pro-Russian separatists have been fighting government forces in eastern regions.

Ukraine and its Western allies have accused Russia of sending military forces across the border, something the Kremlin denies.

The EU imposed sanctions when Russia annexed Crimea in March and has added further measures since. 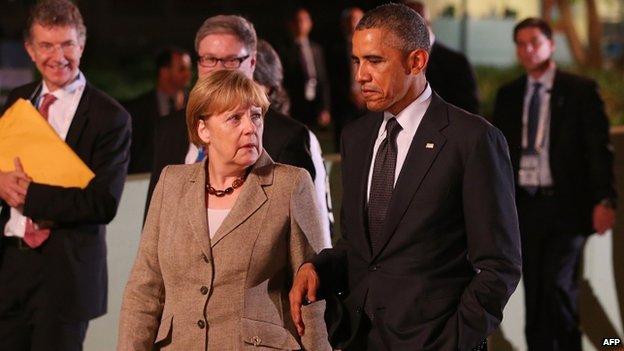 Before the G20 summit began, UK Prime Minister David Cameron said there would “have to be a very different relationship” between Europe and Russia if “we continue to see Russian troops” inside Ukraine, adding that there was “the potential for further sanctions”.

“I’ll shake your hand, but I only have one thing to say to you: you need to get out of Ukraine,” Mr Harper told him, the Canadian leader’s spokesman said.

President Obama said the US was at the forefront of “opposing Russia’s aggression against Ukraine, which is a threat to the world”.

The BBC’s John Donnison in Brisbane says President Putin cut something of an isolated figure among the world’s powerbrokers.

Russian officials said he was planning to leave the summit on Sunday ahead of schedule, but gave no reasons for the move.

Meeting on the margins of the summit on Saturday, Mr Putin urged his French counterpart Francois Hollande to join him to defuse tensions between the two countries over Ukraine.

France has withheld the delivery of two warships to the Russian navy over its actions in Ukraine.

Meanwhile, President Obama said Asia’s security must not be based on intimidation of small nations by big ones, but on mutual alliances.

He did not mention China explicitly but he warned of the dangers posed by territorial disputes in the South China Sea, where Beijing’s actions have raised concern among its neighbours.

Mr Obama said there was “no question” over his commitment to Asia-Pacific allies, referring to US efforts to strengthen strategic ties with the region.

Opening the summit, Australian Prime Minister Tony Abbott said he wanted to use the event to reassure people about the direction of the world’s economy, with a “message of hope and optimism”.

He said job creation, identifying tax cheats and strengthening the global economy would all be discussed.

His government had tried to keep climate change off the agenda, despite calls from campaigners.

In other developments, G20 leaders released a statement in which they vowed to do all they could to “extinguish” the Ebola outbreak in West Africa.

It said that members state were committed to do what was necessary “to ensure the international effort can extinguish the outbreak and address its medium-term economic and humanitarian costs”. 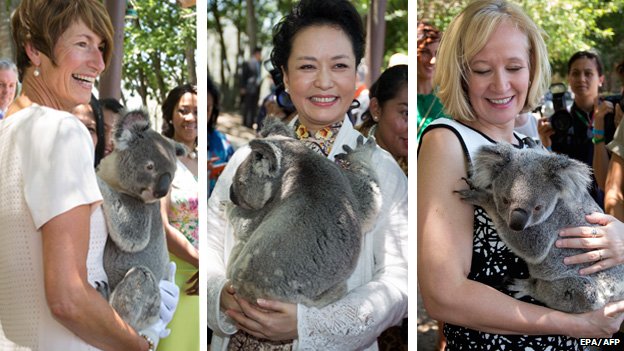 Some of the leaders’ spouses cuddled up to koalas at a sanctuary in Brisbane
Source: BBC
Tags: Palaver NewspaperPapa Owusu Ankomah
Previous Post