The latest attack comes amid a deteriorating security situation in Egypt, particularly in the Sinai Peninsula

The vessel reportedly caught fire in the assault, some 70km (45 miles) off the northern port of Damietta.

A three-month state of emergency was declared in northern Sinai last month after 31 soldiers were killed.

Jihadists have stepped up attacks against police and soldiers since the overthrow of Islamist President Mohammed Morsi last year.

However, direct attacks on Egyptian naval vessels are unusual.

The group behind the latest attack, which happened on Wednesday, has not yet been identified.

Four fishing boats were used in the assault by “terrorists”, four of whom were killed, the military said.

Another 32 were arrested and were being interrogated, it added.

Local media reported that the Egyptian air force had been deployed to deal with the attackers. 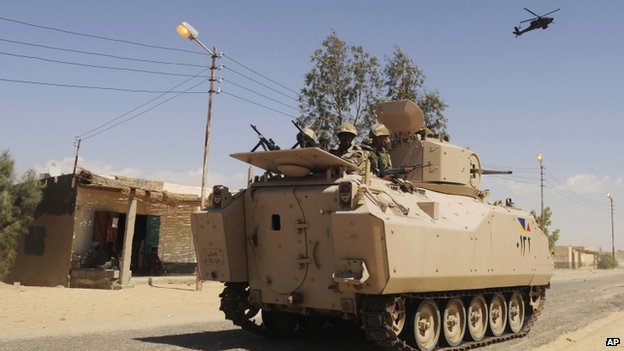 In one of the Sinai attacks, two policemen who were not in uniform were shot dead near Rafah by gunmen.

In a separate attack on Thursday, three Egyptian soldiers were also shot dead after their car was stopped near Sheikh Zuweid, several miles to the west of Rafah.

A small bomb also exploded in a train carriage on Cairo’s underground system, which led to 16 people being injured in the panic that followed. The blast occurred at the Hilmiyat al-Zaytun station in eastern Cairo on Thursday.

The latest attacks come several days after Egyptian jihadist group Ansar Beit al-Maqdis pledged allegiance to Islamic State (IS) militants, who have taken control of swathes of Syria and Iraq.

Ansar Beit al-Maqdis – or Champions of Jerusalem – has been behind a string of attacks on military and police targets in its stronghold in Sinai.

A three-month state of emergency was declared there last month after 31 soldiers were killed in two separate militant attacks near El-Arish on 24 October.

In a separate development on Wednesday, Egypt’s President Abdul Fattah al-Sisi signed a new law allowing for the extradition of foreign nationals sentenced or charged in Egypt.

It is believed the law may pave the way for the release of three non-Egyptian Al-Jazeera journalists, including Australian Peter Greste, who have been held for almost a year.