An indigenous court in western Colombia has convicted seven left-wing Farc guerrillas over the murder of two leaders of the Nasa tribe.

Five were sentenced to between 40 and 60 years in jail and two others will receive 20 lashes.

The two victims had been removing posters praising a Farc leader when they were killed.

Indigenous authorities in Colombia have jurisdiction in their own territories unless this contravenes national law.

The verdict and sentences were decided after several hours of debate by an assembly of about 3,000 members from the indigenous reserve in the Cauca province town of Toribio.

Gabriel Pavi, leader of the Northern Cauca indigenous councils association, said the guerrillas were captured “in uniform and with rifles” and that “all are indigenous”.

The harshest sentence – 60 years in jail – was given to a man who confessed to killing the two native leaders.

Four other defendants received 40 years each for having “fired indiscriminately” on other members of the community, said Mr Pavi.

Two teenagers also arrested – reportedly aged 14 and 17 – were sentenced to 20 lashes. They are to be held at a rehabilitation centre until they are 18, at which point a new assembly will reconsider their cases.

Following the trial, the weapons used by the guerrillas were destroyed in front of the tribal court.

The sentences will be served in the state prison at Popayan, capital of Cauca. 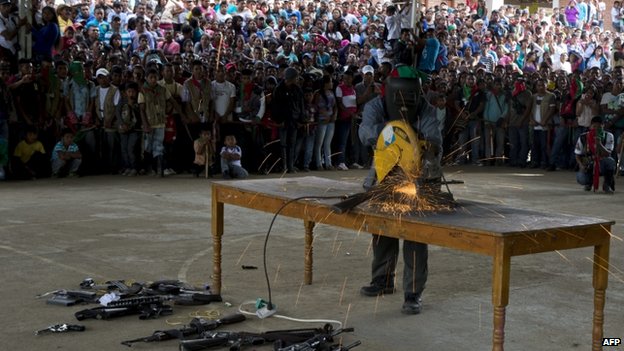