The UN refugee agency says Turkey urgently needs help to care for 130,000 Syrian refugees who have crossed the border in recent days.

The UNHCR said this was the largest influx in such a short period since the start of the Syrian conflict in 2011.

The Kurdish refugees are fleeing an advance by Islamic State (IS) militants, who have seized swathes of Iraq and Syria in recent months.

IS fighters are reported to be closing in on the Syrian town of Kobane.

The capture of Kobane, also known as Ayn al-Arabon, would give the jihadists complete control of the area.

Even before the latest influx, Turkey was struggling to cope with more than a million Syrian refugees who have crossed into its territory since the uprising against President Bashar al-Assad began more than three years ago.

Carol Batchelor, the UNHCR’s envoy in Turkey, told the BBC that such high numbers of refugees would place a strain on any host community.

She called for “increased solidarity and international assistance” for those flooding across the border.

“The situation is deepening. It’s becoming protracted. People are desperately in need,” she added.

“I hope that we are not faced with a more populous refugee wave but if we are, we have taken precautions. If necessary, we have planned how to send these people to safer and further places,” he said. 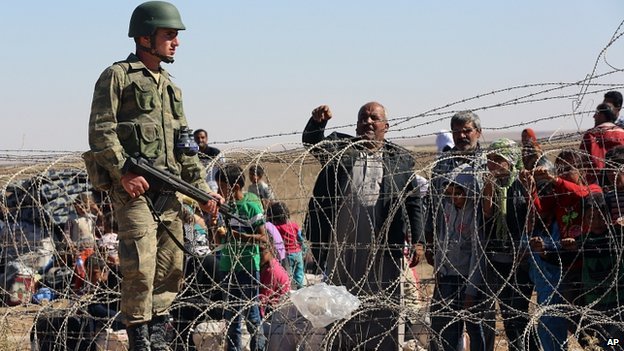 Turkish troops are trying to control the flood of refugees, and stop Kurdish fighters crossing into Syria

Anwar Muslim, president of the Kobane regional government, told the BBC that Kurdish fighters had inflicted heavy casualties on IS and pushed the militants back.

He accused the group of killing women, children and the elderly.

“All our ministers, like ordinary people, have picked up arms. Our people believe we can defeat IS. Our morale is high,” he said.

Clashes then broke out on Sunday after protests by Kurds on the Turkish side of the border.

The BBC’s Mark Lowen, at the scene, said Turkish forces were trying to stop Kurdish fighters from entering Syria to take part in the defence of Kobane.

By Monday only two out of nine border posts in the area remained open, the UNHCR said. 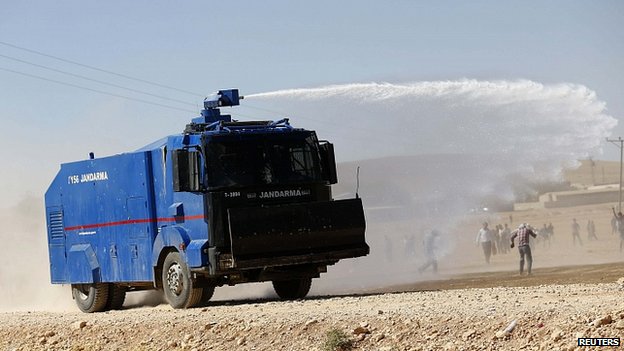 Turkish forces have used water cannon and tear gas against pro-Kurdish protesters near the border
Former UK Prime Minister Tony Blair told the BBC on Sunday that air strikes alone might not be enough to contain the group.

“If necessary, we shouldn’t rule out the use of, particularly, special force capabilities,” he said.

US President Barack Obama previously ruled out the involvement of US ground troops, and has instead promised to provide arms and training to local forces fighting against IS.