Microsoft is suing Samsung in a dispute over Android patent fees.

Microsoft says the South Korean firm failed to pay it on schedule for the use of its inventions and has begun legal action in New York.

In a blog, the US firm said Samsung had used Microsoft’s takeover of Nokia’s handset unit “as an excuse to breach its contract”.

Samsung has said: “We will review the complaint in detail and determine appropriate measures in response.”

The case marks the first time that Microsoft has launched legal action against Samsung.

The two companies have a long-running partnership, due to the Asian manufacturer’s sale of Windows PCs and Windows Phone handsets.

Although Microsoft is best known for its own Windows operating system, it also claims ownership to hundreds of patents relating to Google’s Android OS.

It has pursued many Android device-makers for related licence fees and to date has struck deals with more than 25 companies, including HTC, Acer, ZTE and Nikon.

Samsung agreed to Microsoft’s demands in September 2011 and made its first year’s payment the following year. 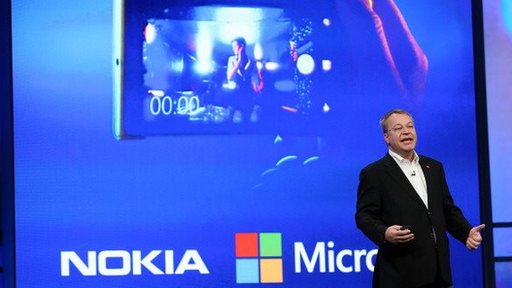 But a censored copy of court papers filed by Microsoft’s lawyer, andposted online by news site Geekwire, indicate that Samsung blocked a second payment after learning of the Nokia deal in September 2013.

Although the documents state that Samsung later paid the fee in November 2013, Microsoft claims it is still owed money to cover the interest on the sum over the period it was not paid.

In addition the US company is unhappy that Samsung is reserving the right not to make future payments.

It also complains that Samsung has asked the Korean competition authorities to intervene to eliminate the need for future fees – a matter that Microsoft says would be outside the regulators’ authority.

Furthermore, the papers suggest Samsung has threatened Microsoft with its own patent infringement claims relating to the Nokia takeover.

“Microsoft values and respects our partnership with Samsung and expects it to continue. We are simply asking the court to settle our disagreement, and we are confident the contract will be enforced,” wrote David Howard, deputy general counsel for Microsoft, on the firm’s blog.

Samsung declined to discuss any of the specific claims.

Microsoft has never disclosed how much it makes from its Android patents, but analysts have estimated the figure is between $1bn (£595m) to $2bn a year.

One company watcher said Microsoft would be keen to avoid a precedent that other firms might try to make use of to cancel their own payments.

“The fear would be that this case could develop into a revenue stream leakage that would be difficult to tap,” said Windsor Holden, research director at Juniper Research.