Canadian pop star Justin Bieber has pleaded no contest to misdemeanour vandalism in connection with the egging of his neighbour’s home and has been sentenced to two years’ probation.

Bieber, 20, was not present in court for the arraignment.

The singer faces two other criminal cases in Florida and Toronto.

“Justin is glad to get this matter resolved and behind him,” Bieber’s representatives said in a statement after the verdict by Los Angeles Superior Court in Van Nuys.

“He will continue to move forward focusing on his career and his music.”

One of the singer’s friends was arrested on drug possession charges after that search.

The LA County Sheriff’s Office say they were looking for surveillance video tapes when they spotted the drugs “in plain view”.

Surveillance footage seized from the home appears to show Bieber high-fiving friends and celebrating after throwing eggs at his neighbour’s home, police said.

The pop star could have faced a more serious felony charge if the damage to the home had been greater than $20,000.

He has since moved out of Calabasas to Beverly Hills. 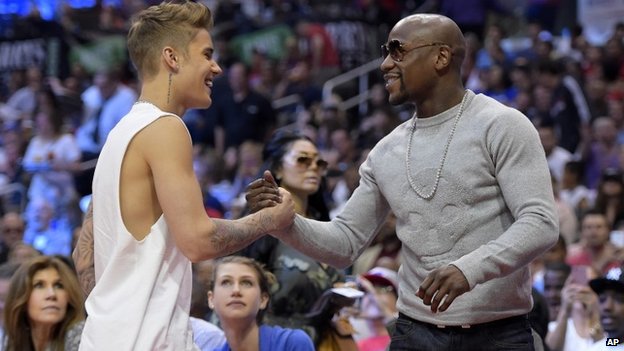 Bieber is part of the Los Angeles celebrity firmament

Two previous investigations into Bieber’s conduct by the sheriff’s department did not lead to charges.

Prosecutors declined to charge him last year after a neighbour complained he drove recklessly through the area, and in November 2012 after a paparazzi photographer accused Bieber of assault.

Meanwhile, Miami authorities have charged him with driving under the influence and driving without a valid licence. That trial is due to take place later this month.

And Toronto prosecutors have accused Bieber of assaulting a limosine driver in December.