Dozens of people have been killed in two explosions near a crowded market in the volatile central Nigerian city of Jos, witnesses say.

A local journalist reported at least 40 bodies in a hospital in Jos, with more being brought in.

Tension is rising in the area, with youths blocking some roads.

A suicide attack in the northern city of Kano on Monday killed four people.

A military spokesman told Agence France-Presse news agency that one bomb had been placed in a truck and another in a minibus, but this has not been independently confirmed.

he state has been dogged by violence blamed on land disputes between semi-nomadic Muslim Fulani herdsmen and mainly Christian Berom farmers.

The Nigerian government is also currently trying to trace more than 200 girls captured by Boko Haram in April from a boarding school in the north-eastern town of Chibok.

The case has shocked the world and prompted foreign powers to send military advisers to assist Nigeria’s army tackle the insurgency.

On Tuesday, parliament approved a six-month extension of a state of emergency in three north-eastern states – Adamawa, Borno and Yobe.

More than 1,000 people have been killed in Boko Haram attacks this year but the government says it has pushed the militants back into their strongholds in Borno. 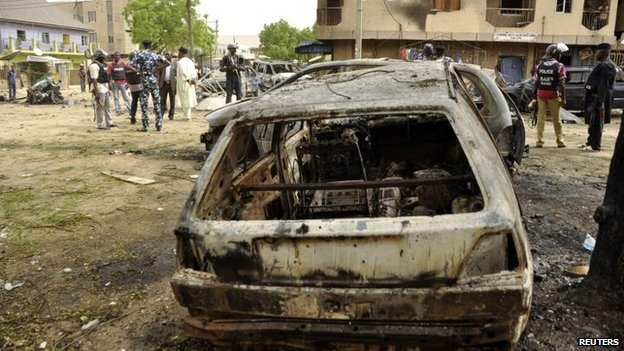 Boko Haram is fighting to overthrow the government and create an Islamic state.

Nigeria’s violence is not confined to the north.

Earlier this month a car bomb in the capital Abuja killed at least 19 people and injured 60 more.

The explosion happened close to a bus station where at least 70 people died in a bomb blast on 14 April.

7 great reasons to exercise while pregnant